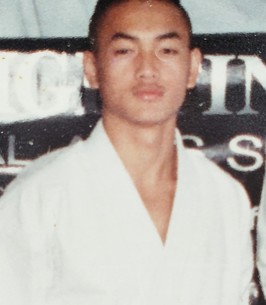 Print
Outhaivath Jake Sysouvanh, 44, of Stockton, California, entered heaven on January 10th, 2021. He is survived by three sons, his mother and three siblings.

Jake was born on January 6th, 1977 in Muang Khongxedon, Laos. At six months of age, him and his family moved to Thailand. On April 30, 1980, his family came to the United States as refugees. He lived in Albuquerque, New Mexico until he was 10 years old. He moved to Stockton, California in 1987, where he stayed the rest of his life. He became a citizen of the U.S. on September 18, 1990. At 10 years old, he also began to pursue his passion in karate at Tibon’s Goju-Ryu Martial Arts School. Jake was an exceptional martial artist. He won numerous competitions, awards, and recognition for his fighting abilities. He studied the martial arts until the age of 23, becoming a second-degree black belt. He attended Edison High School, where he also worked as a karate instructor. In 1997, he worked at R.E Service for about a year.

Over the years, he developed a heart condition that hindered his ability to work. He had the heart of a fighter and always lived his life marching to the beat of his own drum. He was a great problem solver and always found creative forms of entrepreneurships. He was a well-loved individual and displayed so much love to those around him. He enjoyed karate, shooting pool, BBQing, and socializing with others.

To send flowers to the family of Outhaivath Jake Sysouvanh, please visit our Heartfelt Sympathies Store.

We encourage you to share any memorable photos or stories about Outhaivath. All tributes placed on and purchased through this memorial website will remain on in perpetuity for future generations.

Provide comfort for the family of Outhaivath Jake Sysouvanh by sending flowers.
Send Flowers
next page >>
Page 1 of 0
Share
×