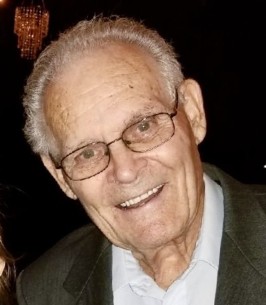 Share this tribute
Memorial Candles Lit for Mervin | SEE ALL
Light a Candle
"We are honored to provide this Book of Memories to the family."
— Park View Funeral Home
"You will be missed our dear neighbor. No more fighting over who will win our golf game and sharing stories."
— Bill and Leslie McLaughlin
"I will treasure the memories I have with Glen. He was such a funny, caring, all around great person. My family loved him dearly."
— Carolyn and Mark Flores, Konawa, OK
Funeral Details Memory Wall Photos & Videos Send Flowers

Print
Mervin Glen Brown was born March 1, 1936, in Nivina, OK, to Mervin and Ethel (McKee) Brown. The family moved from their farm in Oklahoma to the Stockton, CA, area during World War II. Glen married Norma Roth of Denver, CO, in August 1956. To this union was born Michael, Laura, Thomas, and Nancy. Glen served in the United States Air Force from 1955-1964. From 1964-1973 he worked at the Sharps Army Depot in Manteca, CA. Glen proudly earned his GED in 1972. In 1973, Glen and Norma moved to Curtis, NE, and they owned and operated Glen’s Appliance Store. He returned to California in 1975 and continued to repair appliances.

Glen deeply loved his children, grandchildren, and great-grandchildren. He was a devoted family man and traveled to visit his family in Oklahoma, Colorado, and Nebraska regularly. Glen’s other passion was fishing and they lived near Lake Comanche so he could fish whenever time was available. He is remembered largely for his kindness and willingness to take others fishing. Glen proudly drove his Model A with Geneva and the Angel’s Camp Model A Club all over Northern California. He and Geneva also enjoyed pouring his time into his church, serving with his handyman skills in many regards.

To send flowers to the family of Mervin Glen Brown, please visit our Heartfelt Sympathies Store.

We encourage you to share any memorable photos or stories about Mervin. All tributes placed on and purchased through this memorial website will remain on in perpetuity for future generations.

"Glen Brown" will remain in our hearts forever. From all of us at Foothill Evangelical Lutheran Church.
Friday January 08, 2021 via Heartfelt Sympathies
Share This:

We will miss you. Love Frank and Diana
Thursday January 07, 2021 via Heartfelt Sympathies
Share This:
LC
Glen was a talented man with a helpful heart. We always looked forward to He and Geneva visiting the ranch during cherry harvest after he had officially retired from here at Westwind Farms. He will be missed my all who knew him . Blessings and peace to you Geneva and family. Leonda Cook at Westwind Farms in Lodi CA
Leonda A Cook - Wednesday January 06, 2021 via Condolence Message
Share This:

We will miss our cousin. Much love to Geneva.
Maxine, Katy and Debbie - Tuesday January 05, 2021 via Heartfelt Sympathies
Share This:

You will be missed our dear neighbor. No more fighting over who will win our golf game and sharing stories.
Bill and Leslie McLaughlin - Sunday January 03, 2021 via Memorial Candle
Share This:
SP
Thank you so much for being my best friend (sister) father. I love the nickname Susie Boozy that you gave to me. I love you so much. Great-full that you now have peace.
Susan Poole - Saturday January 02, 2021 via Condolence Message
Share This:

I will treasure the memories I have with Glen. He was such a funny, caring, all around great person. My family loved him dearly.
Carolyn and Mark Flores, Konawa, OK - Friday January 01, 2021 via Memorial Candle
Share This:

Geneva, you as well as the rest of the family are in our prayers. Please know we love you, we're sorry we can't be there.
Mark & Carolyn Flores - Friday January 01, 2021 via Heartfelt Sympathies
Share This:
1
Page 1 of 1
Share
×