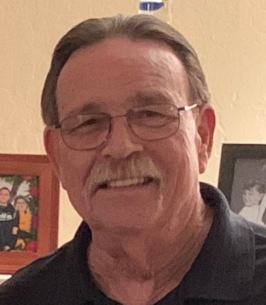 John was born in Oakland, CA to Dick and Beatrice Wilder on August 4, 1947. He was raised in the “Via” neighborhoods in San Lorenzo, graduating from Arroyo High School in 1966. He was inducted into the US Army on August 17, 1967. He served in the Vietnam War with the specialty title of “Vehicle Repairman”. He received the following medals:
1. National Defense Service Medal. 2. Vietnam Service Medal, 3. Good Conduct Medal
4. Vietnam Campaign Medal He received Honorable discharge on July 22, 1969. His reserve term officially ended August 16, 1973.

John met his beloved wife, Christine, in October 1974. They got engaged and were married in Reno, NV on May 24, 1975. On January 9, 1978 they had their daughter, Julie Christy.
John lived a full life working hard taking care of his family and enjoyed being a Papa to his beloved grandkids, Aaron and Katrina. John and his wife also enjoyed spending time with and taking road trips with his favorite sister-in-law, Kathy Austin. John became a member of the Upper Room Church in 2015 and actively served and was part of the church. He loved to fellowship with other church members.

John dealt with many health issues over the past 5 years including liver cancer, a liver transplant and then Stage 4 lung cancer. Yet he never complained. He did whatever he could to get better but with the support of his family, he decided to make the most of his time left and stop all treatments. He was at home being cared for by his wife and daughter when he went home to be with the Lord and family that went on before him.

He leaves behind his older sister Patricia Arnett, beloved wife Christine, his daughter Julie Opp and his grandkids Aaron Opp and Katrina Opp.

He will forever be loved and missed.

To send flowers to the family of John Charles Wilder, please visit our Heartfelt Sympathies Store.

We encourage you to share any memorable photos or stories about John. All tributes placed on and purchased through this memorial website will remain on in perpetuity for future generations.

Add Photos Post Condolence
UH
John will always hold a special place in our hearts here at The Upper Room Church Family. He has no more pain or suffering. He's walking on those streets of gold just talking with God! Praying for Chris & Julie and the entire family that the Lord will give them strength during this time. We love all of you!
Upper Room Church, Hayward - Tuesday April 13, 2021 via Condolence Message
Share This:

In loving memory, Lynn & Alan Opp
Lynn Opp - Monday April 12, 2021 via Heartfelt Sympathies
Share This:
R
John we went way back , and although we never physically connected again, I feel like we did re-connect they me and Chris constant communication ! I’m glad you no longer in pain and home with the lord!
Rest in Paradise, my Friend John.🦋💙Rick
Rick - Thursday April 08, 2021 via Condolence Message
Share This:

Forever Remembered.
Rangel Family - Wednesday April 07, 2021 via Memorial Candle
Share This:
RH
John thanks for being good son in law to my Mom, good husband to my sister, good dad to julie and 2 grandkids! Heaven is rejoising now "There is a New Name Written down in Glory- John C Wilder" Bob & Sue
robert&suzanne Hunziker - Wednesday April 07, 2021 via Condolence Message
Share This:
RH
Thanks John being a person who was GOOD to his Mother in law, wife, and daughter. More so since He left earth "There has been a new name written in Glory" with Jesus, the Angels and of course millions of others Bro in Law Bob
robert&suzanne Hunziker - Tuesday April 06, 2021 via Condolence Message
Share This:
1
Page 1 of 1
Share
×

Dad with his JuJu
Share on Facebook
Send flowers to the family
Choose from beautiful standing, table and basket arrangements. Safe and secure online ordering.
View Flower Arrangements
What has already been purchased for the family?
Family Log-In