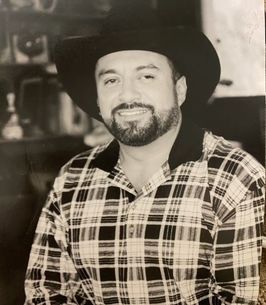 Print
Ignacio “Nacho” Segura passed away in Caldwell, Idaho on January 20, 2021. Nacho was born on November 17th, 1957 in Modesto, California to Luis Pacheco Segura & Ermila Segura. Nacho was one of three brothers, Luis Hernandez Segura, Moses Segura, and his sister, Theresa (Segura) Troutner. Nacho would spend his weekdays practicing on the football field at East Union High School, weeknights working on trucks with the family business, Segura & Sons, and his weekends playing drums with his friends.
Nacho met his first wife, Patricia Clark, and they married on March 26th, 1977. Nacho would go on to share his love of racing, and cars with his sons, Ignacio, Louis, & Demetrio (Mecho), and his lust for life was spread over their two daughters, Cloresa, & Tiffany. They spent their childhood riding dirt bikes, looking up their scout leader of which, Nacho volunteered his time to, and hearing the bellows of Nacho calling balls & strikes.
Nacho started his first business working on semis called Genuine Diesel, where he spent many days & nights working away to make his business successful.
Nacho moved to Caldwell, Idaho in 2003 with longtime girlfriend Pam Westing and they would later marry on November 2nd, 2007. They had together a bundle of mayhem, Justin and a little angel, Jessica.
In Idaho, Nacho kept himself busy with leading Justin’s Boy Scouts troop, coaching baseball, but joining the Owyhee Motorcycle Club, was the cherry on top. That is where the love of racing flourished. Nacho started Justin racing motorcycles before he moved him to Outlaw Karts and finally on to Sprint Cars. Nacho and Justin were able to travel to numerous states, and would often find themselves back in California to the Stockton 99 Speedway. Travelling back to Stockton allowed him to catch up with his family and old friends. It did not stop there, he also got his youngest daughter, Jessica into a drag racing.
Nacho is survived by his father Luis P. Segura of Lodi, CA; Siblings: Louis (Patsy) Segura of Manteca, CA, Moses Segura of Manteca, CA, Teresa (Mark) Troutner of Lodi, CA. His children Ignacio Segura of Modesto, CA, Louis Segura of Middleton, ID, Mecho Segura of Caldwell, ID, Cloresa Segura of Modesto, CA, Tiffany (Carlos) Moreno of Discovery Bay, CA, Justin Segura of Caldwell, ID & Jessica Segura of Caldwell ID. As well as 8 granddaughters, Izabela Alyse, Isela Arinea, Leticia Annalise, Micaela Ava, Alliyah Raquel, Karly Lynn, Nevaeh Emone, & Zariyah Arianna, and 2 grandsons, Ignacio (Chito), and Fernando Mario.
He was predeceased by his mother, Ermila

Nacho will be missed by many, but never forgotten.

To send flowers to the family of Ignacio - Segura, please visit our Heartfelt Sympathies Store.

We encourage you to share any memorable photos or stories about Ignacio. All tributes placed on and purchased through this memorial website will remain on in perpetuity for future generations.

Provide comfort for the family of Ignacio - Segura by sending flowers.
Send Flowers
next page >>
Page 1 of 0
Share
×